A Plea for Christ-centered Hymnody

The article below was published in The Republic in December, 2007, in response to an article that appeared a few days earlier. 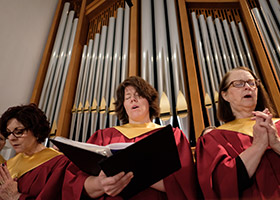 When I read the banner on Saturday’s paper, “Contemporary vs. Traditional worship,” I thought readers of The Republic might be treated to a debate or at least an honest discussion of both sides.  I was disappointed, but not surprised.  Worship music is an issue of grave importance to the church-at-large, but any honest discussion of the issue is hard to come by.

Heart-felt worship is wonderful, but I would argue that nothing is more heart-felt to a repentant sinner than the Good News of God’s love in Christ, faithfully proclaimed in word and music.  What worshippers need is the Law (God’s condemnation of their sin) in all its severity and the Gospel (God’s free forgiveness of their sin for Christ’s sake) in all its comfort and sweetness in both word and music.  In the church, it is not enough to sing of God’s awesomeness or His majesty in a vague or generic way.  His awesomeness and majesty should be linked to His saving work in Christ.

Pop music is employed in worship primarily for its sound, not for its clear proclamation of sin (our problem) and the Gospel (God’s solution to our problem).  The texts of many pop Christian songs are not bad in themselves.  It’s not what they say; it’s what they don’t say that makes them less than the best choice for Christian worship.  In a culture in which biblical illiteracy is a growing problem, can we afford music that does not clearly and explicitly proclaim Christ and His work?

There has been an explosion of good hymn writing in recent years due to the growing popularity of the three-year lectionary.  More biblical texts and lessons are being set to music than ever before.  These hymns are more contemporary than many of the praise and worship songs popular today and they come from a variety of backgrounds—Roman Catholic and Protestant, African and Hispanic, to name but a few.   There is no lack of sing-able, Christ-centered material out there, but many in our churches are not aware of it because they are not being exposed to it.

We may employ any music we wish in worship.  The question is: what music most clearly and explicitly proclaims the work of Christ?  Answering that question goes a long way toward providing clarity and unity in the church’s song.